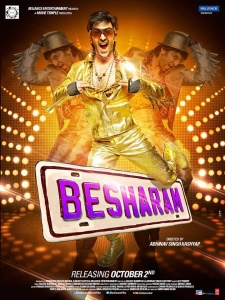 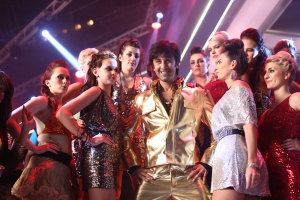 The poster portrays a flamboyant Ranbir, dressed in a bold printed yellow shirt and denim jeans, sitting in the boot of the car with glitzy sunglasses and a neon watch. The director required Ranbir to lose his lean look and appear muscular for this new movie to justify a few fighting sequences that his role requires him to perform.

‘Besharam’ inexplicably chooses to make ‘Babli’ the focus of its story. ‘Babli’ is a terrific character played by Ranbir who is a street smart car mechanic living in a Delhi orphanage, for which Ranbir had to familiarize himself with the mannerisms, lingo and style of a Punjabi Delhi-ite. Ranbir is seen flaunting the ideal Punjabi look with turban and traditional attire, and matches style with Pallavi in this movie. A set reminiscent of the garish, over-the-top films of the 1980’s and 1990’s, featuring a myriad of colorfully clad cast hued kurta-pyjama suits and cotton candy pink turbans constitutes the film. The dhol props seen in the songs seem like they are set to take you back in the retro world.

Making a remark, Ranbir said “The style and the look adds the requisite cheapness and masala tadka to this character. The attire brings total fairness to distinct culture and the dressing style Delhi holds. This has been wonderfully brought out in the costumes of the characters”.

The worldly-wise Babli learnt at a young age how to survive the trauma of having no one to care for him. He grew up fast in a Delhi orphanage and has devoted his life to helping and mentoring the other children in the shelter. The cheeky and fiercely independent Babli takes as his life motto: “Na Samaan Ka Moh, Na Apmaan ka Bhay”, translated as “No Want for Respect, No Fear of Disrespect”. The film unfolds his many ‘Besharam’ moments with hilarious consequences.
The movie will also see Ranbir sharing the frame with his parents – actors Rishi and Neetu Kapoor – for the first time on the big screen.

One thought on “Ranbir Kapoor Dons The ‘Besharam’ Look”