The wait is over and the first look of the Arjun Kapoor – Kareena Kapoor Khan starrer Ki and Ka has been released!

The makers of Ki and Ka had earlier released some striking black and white images featuring the main protagonists before the filming began in the summer of 2015.

This is the first time Kareena and Arjun will be paired opposite each other and that too as a modern day husband and wife. Arjun had announced the film `to his fans on Twitter, ‘An amazingly ambitious LadKI meets a uniquely fascinating ladKA !!! Balki Kareena and I bring u the Love Story of Ki and Ka Summer 2016!!’.

There is already a lot of hype around this project, with the unconventional duo being brought together by R Balki. We must say we are loving what we have seen from the film so far and Arjun and Kareena’s chemistry is definitely on point! 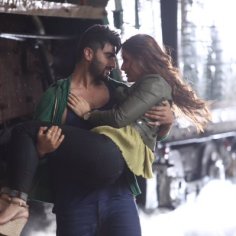