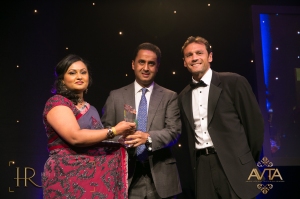 The Asian Viewers Television Awards (AVTA) announced this year’s winners at its high profile awards ceremony in London. Honouring the best of Asian Television, the Awards recognized the excellence within the Asian television community.

Hosted by Indian TV actor Karan Tacker, the awards took place on Saturday 18th October 2014 at the prestigious Lancaster London Hotel. Consisting of nine award categories nominated completely by the viewers, NDTV went on to win two of the nine awards. Regarded as one of the most watched and respected news and lifestyle networks in India, its news channel NDTV 24×7 was named the best News Channel of the Year, beating respected news channel ABP News and Aaj Tak.

Rohit Jaiswal, Associate Vice President, Network Distribution & Affiliate Sales said, “We are very pleased to have been voted the most preferred Asian news channel in the UK. We thank our viewers, our distribution affiliates and our marketing and ad-sales team Here & Now 365, who have all contributed in helping grow the NDTV brand in the region over these years.”

“UK is a key market for us and we are constantly striving to bring the best and relevant content to all the viewers and our advertisers,” he added.

Additionally, one of NDTV’s most esteemed news anchor and journalist, Barkha Dutt was named the News Presenter of the Year, marking its second award for the evening by pasting fellow nominees Charul Malik, Aaj Tak News and Ravish Kumar, NDTV.

Brainchild of Rajan Singh, formerly a TV executive of Star TV and now heading Digi Media Global, as the first event of its kind, the Asian Viewers Television Awards winners were determined by the UK viewers.