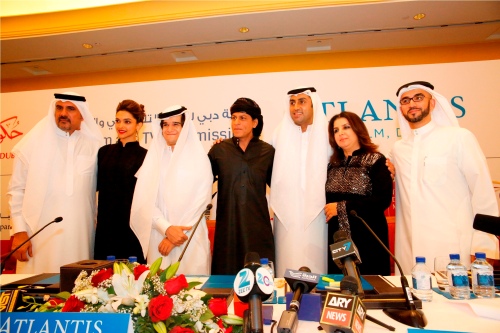 DFTC has partnered with Dubai Government entities to simplify the entire filmmaking process for the production team, while Atlantis, The Palm is hosting a majority of the shoot in and around the resort’s iconic grounds. Emirates Airline has also played its role in flying the stars and crew to Dubai for the production while the Dubai Department of Tourism and Commerce Marketing (DTCM) has provided extensive logistical support to facilitate the overall shoot.

Happy New Year is the latest coup in a busy and successful year for Dubai’s burgeoning media production industry. The filmmakers’ decision to shoot a significant portion of the film in Dubai confirms the emirate’s growing prominence as a production location favoured by filmmakers around the world and its capacity to accommodate a variety of large international productions. In the first half of 2013 alone, DFTC has already facilitated the Dubai-based shoots for several notable productions, including Indian films Ramaiya Vastavaiya, Ladies and Gentleman and Mental, episodes of MasterChef Australia, and Arabic TV series such as Mohal and Ya Malak Kalbi.

Jamal Al Sharif, Chairman of Dubai Film & TV Commission, commented on Happy New Year’s presence in Dubai, and the support that Dubai has been able to offer: “Happy New Year is a true mark of the success that can be achieved through the collaboration of public and private entities in Dubai. In close partnership with Atlantis, The Palm, Emirates and DTCM, we’re delighted to help facilitate the latest venture from Farah Khan and Red Chillies Entertainments, and showcase Dubai as a world-class filming destination”.

Serge Zaalof, President & Managing Director, Atlantis, The Palm said:  “Atlantis, The Palm is proud to host Dubai’s largest Bollywood film to date and showcase Dubai’s fantastic entertainment and hospitality facilities to an important international audience.  India is a significant tourism market for the resort and for Dubai, so it’s a pleasure partnering with DFTC to make this opportunity a reality.”

Speaking during filming in Dubai, Shah Rukh Khan, said: “Dubai is a beautiful city. It has a great scenic balance of ancient and modern architecture. It is not just the shopping capital of the Middle East, but is a perfect location for a film shoot. We have been shooting for our film, Happy New Year, here since September 2nd and I would like to thank Dubai Film and TV Commission, the Dubai Department of Tourism and Commerce Marketing, Atlantis, The Palm and Emirates for being such gracious hosts to us. Dubai is like home for me and I have loved every bit of my experience of shooting for Happy New Year here.”

Sheikh Majid Al Mualla, Emirates’ Senior Vice President, Commercial Operations (Gulf, Middle East & Iran), said: “It is extremely rewarding for us at Emirates to support Dubai in its quest to promote the city as a film-making hub in the Middle East. The making of Happy New Year has truly enriched Dubai’s profile in a very strategic market, and we are proud to extend our support to an already impressive list of major international productions that have chosen to film in Dubai. With a diversity of locations, a cosmopolitan population and inherent hospitality, Dubai and Emirates share a similar vision in putting the city at the forefront of world cinema.”

Dr. Ahmad Belhoul, CEO, Strategy and Tourism Sector Development at DTCM, said:  “The influence of film is incredibly important when it comes to travellers’ decision-making and the images people form of destinations. As such we’re delighted that Happy New Year, one of the most anticipated Bollywood films, is being filmed in the iconic grounds of Atlantis, the Palm in Dubai. Bollywood in particular is key for Dubai with India being one of our top 10 guest source markets. We’ve already seen huge numbers of visitors from India this year and we’re confident this market will remain strong as we enter a busy period in our events programme – featuring many Indian music and cultural events including 9/12 Hungama, with three of Bollywood’s biggest music stars.”

Abhishek Bachchan, Actor, said: “It has been an utter delight to shoot in different locations of Dubai for Happy New Year. The people are very humble and sweet and the hospitality is remarkable. This film becomes even more special because of the awesome experience we have had as a team while shooting our film here in Dubai.”

Deepika Padukone, Actor, added: Dubai has been a brilliant destination for holiday, relaxation and shopping. Dubai holds a special place for me because I came here for the music launch of my first film, Om Shanti Om.  Since then, the connection and the love with the people has been stronger. And now I am experiencing a whole new Dubai during the shoot of Happy New Year. It is beautiful and very easy to shoot here. I have had a great experience shooting the film here.

Farah Khan, Director, said:  “I wrote the script of Happy New Year with Dubai in mind. In fact in this film, Dubai is not just a location but an integral character! The entire climax is shot around New Year’s Eve at Atlantis, The Palm! To have been able to secure the location and have all the logistics in place is a perfect combination. The different locations of Dubai where we have shot are essential to the film and I want to thank the Dubai Department of Tourism and Commerce Marketing, the Dubai Mall and Dubai Airport in particular for being so helpful. I will always cherish this experience of shooting Happy New Year here in Dubai.”

Jamal Al Sharif concluded: “As one of the largest centres of film production in the world, the Indian film industry offers exciting opportunities for collaboration with Dubai. Happy New Year embodies the unique partnership we have with Bollywood and greater India as we work together to establish Dubai as a unique consolidated production hub that caters to the many requirements of India’s diverse film industries.”