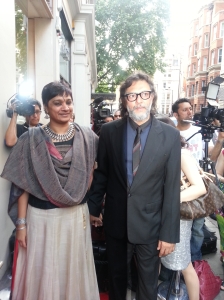 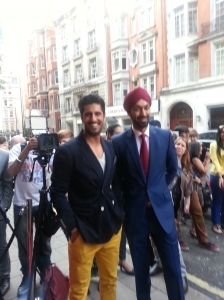 With London having cemented its position as one of the most important markets for Bollywood, more and more filmmakers are making time for pre-release promotions in the Capital.

Bhaag Milkha Bhaag is the latest in line with a grand gala premiere held in London this weekend. The film is based on real-life sports hero, Milkha Singh, christened as the ‘Flying Sikh’ – a title he says was given to him by the people of Pakistan when he won a match there against Pakistani athlete Abdul Khalid. Rakeysh Omprakash Mehra, who has earlier delivered critically acclaimed hits like Rang De Basanti and Delhi-6 is at the helm with the multi-talented Bollywood director and actor Farhan Akhtar playing Milka Singh on reel.

The premiere was preceded by a red carpet event where the stars flaunted their best for the shutterbugs. Both leading actors, Farhan Akhtar and Sonam Kapoor walked the red carpet along with Rakeysh Mehra and Prasoon Joshi, the acclaimed lyricist for whom this is his first foray into scriptwriting. There was even a brief appearance by Mr Milkha Singh himself.Speaking to the media, Rakeysh Mehra said that he was extremely positive about the film which is his most special project till date.

‘You will understand what I mean when you see it. It has changed me, really. Also, we were lucky because Milkha Singh jee was very involved in the whole process, giving us his blessings throughout.’

Farhan Akhtar echoed the same emotion when he spoke about how he got involved in the project. ‘Rakeysh came to me with the script and I was immediately sold. Milkha jee’s life inspired me and I just knew that I wanted to be a part of this man’s story. We can all learn so much from him.’

Sonam Kapoor, who is on high career-wise with the appreciation that she has garnered for her recent release Raanjhaana, sashayed down the red carpet in a Barbara Casasola floor-length dress.

‘You will know why I did the film when you see the story. I think this will make incredible cinema.’

‘I feel great actually, I’m really proud to be a part of this film. Bhaag Milkha Bhaag was an outstanding script; I wanted to work with Farhan Akhtar and Rakeysh Mehra. My role is a pivotal role, and it was an honour to play the part.’

Elaborating on the professional relationship she shares with Rakeysh, who previously directed her in Delhi-6, Sonam was full of admiration for the ace filmmaker.

‘I love Rakeysh Omprakash Mehra. For me he is somebody who gave me a lot of confidence and helped me open up. I went through a bad patch after Saawariya. When I went on the sets of Delhi-6 he made me feel beautiful and made me feel talented. I was a young kid and wasn’t confident about who I am and he gave me the confidence and I will always be grateful for that. I did Bhaag Milkha Bhaag for him. Even if he asked me to walk backwards in the frame, I would do it.

The film has its worldwide release on July 12th.